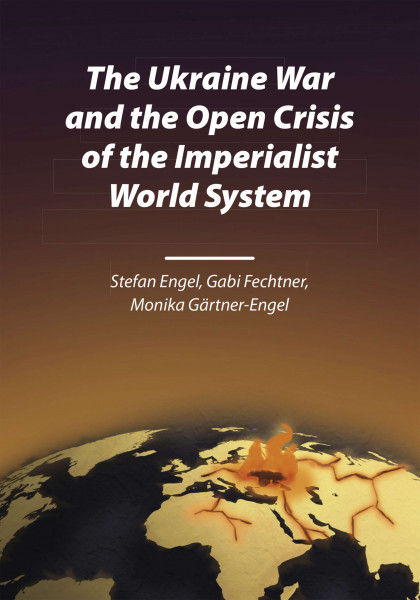 Beschreibung Bewertungen 0
Beschreibung
"With the Ukraine war and the acute threat of a Third World War, a new phase of... mehr
Menü schließen
Produktinformationen "The Ukraine War and the Open Crisis of the Imperialist World System"

"With the Ukraine war and the acute threat of a Third World War, a new phase of accelerated destabilization of the imperialist world system emerged within the framework of the general crisis of capitalism. It prepares the ground for a revolutionary world crisis. Thus the general crisisridden nature of imperialism takes on a new quality. All major contradictions of the imperialist world system are intensifying by leaps and bounds. … This new starting situation abruptly changes the task of the revolutionary class struggle." (p. 58)

Author Portrait:
Stefan Engel, a trained mechanic and today a free publicist, was Chairman of the MLPD for 37 years. He has made his theoretical work and his practical know-how in the leadership of workers' struggles available to the revolutionary working-class movement for decades, also internationally. Since 1991 Stefan Engel is head of the editorial board of Revolutionärer Weg, the theoretical organ of the MLPD. He is recognized as a Marxist-Leninist theoretician throughout the world.
Gabi Fechtner, a trained toolmaker, is MLPD Chairwoman since April 2017 and thus the rst woman worker to lead a revolutionary party in Germany.
Monika Gärtner-Engel is MLPD Internationalism Secretary and Main Coordinator of the revolutionary world organization ICOR. She is co-author of the book, New Perspectives for the Liberation of Women, and an acknowledged representative of the international militant women's movement.