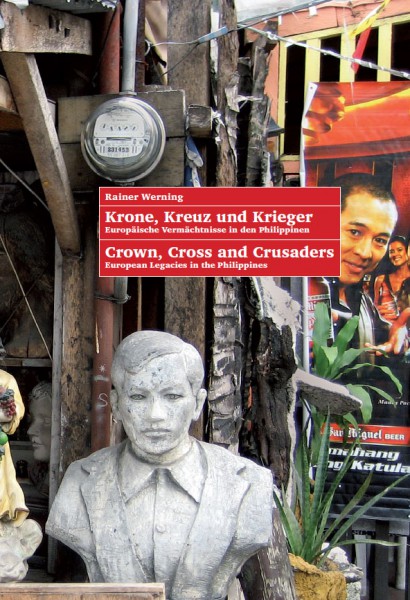 Rezension erschienen in:
INTERNATIONALES ASIENFORUM – International Quarterly for Asian Studies
43. Jahrgang, November 2012 - Nr. 3-4/12 , Freiburg i.Br., S. 394-396 – ISSN 0020-9449
- - - - - - - - - - - - -
RAINER WERNING, Krone, Kreuz und Krieger. Europäische Vermächtnisse in den Philippinen. Crown, Cross and Crusaders. European Legacies in the Philippines. Essen: Verlag Neuer Weg, 2011, 109 pp., € 9.00. ISBN 978-3-88021-386-9
Many German-speakers traveling to the Philippines for the first time may be surprised to come across a street and a metro station named ‘Blumentritt’ in Manila. In the nineteenth century Ferdinand Blumentritt, an Austrian ethnographer, was one of the most knowledgeable European scholars about the Philippines and a friend of the Philippine national hero José Rizal. Blumentritt is just one out of many European legacies in the Philippines and probably one of the better known. European legacies in the Philippines are the central theme of Rainer Werning’s new book. Rainer Werning is one of the leading German political scientists and publicists about the Philippines who knows the political and colonial situation in the Philippines from years of research. The book is the publication of lectures that Rainer Werning held in Philippine universities and the German Club in Manila. The lectures were held in English and, therefore, half of the book is in English as well. The other half of the book consists of the German translation.
The first chapter of the book deals with omnipresent and better known legacies whose effects are still very much visible in contemporary everyday life in the Philippines. The most obvious European legacy in the Philippines is the name of the country. The Philippines were named after the Spanish king Philip II, who not only wanted to have a base for the trade with China, but was also driven by religious motives to spread the Catholic belief. He also supported the harsh treatment of the Moros in the Southern Philippines. Spaniards born in the Philippines were termed Filipinos, but already Rizal – of Chinese origin – considered himself as Filipino. Other legacies from Spanish colonialism are the widespread practice of Catholicism, the celebration of fiestas and landlordism. The latter still impacts on the contemporary social structure. Many landlords are of Spanish origin.
Hidden legacies are the topics of the next chapter. Rainer Werning first introduces the reader to John Joseph Pershing, who during US colonialism in the Philippines held various positions in the Southern Philippines. He was overall commander of Mindanao and became known as the ‘butcher of the Moros’. Rainer Werning then deals with a nearly unknown chapter in the relationship between Spain and the Philippines: the role of the Falange Exterior, a Fascist organization during the Second World War. The Japanese occupation of the Philippines was supported by the Falange. The organization was very active in the Philippines and had around 10,000 members.
Another chapter portrays protagonists who influenced bilateral relationships. Rainer Werning explains the continuing integration of the Philippines in the world economy in the nineteenth century, which advanced with increasing mobility. Many members of the Propaganda Movement (Filipino liberals exiled in 1872 and students abroad) went to Europe. One of them was José Rizal who made friends not only with the aforementioned Ferdinand Blumentritt, but also with Rudolf Carl Virchow, a leading figure in medicine and social reform. Another almost unknown aspect of Philippine history was the willingness of the Philippine government to admit Jewish refugees during the Second World War. The Jewish community in Manila peaked at around 2,500 persons in 1941. Mindanao was targeted as a place for resettlement, but the Japanese occupation brought the plans to a stop. Individual members of the Jewish community enriched the Philippine cultural and scientific scene. One example is Herbert Zipper, a composer, conductor and musician who became conductor of the Manila Symphony Orchestra.
In the last chapter, Rainer Werning introduces the audience to Captain Hermann Leopold Schück from Silesia, who befriended the Sultan of Jolo in the nineteenth century and became an amateur diplomat. One of the richest business families in the Philippines today is the Zobel de Ayala family, whose conglomerates strongly impact on the Philippine economy and the development of Makati, Manila’s business quarter. The family traces its origin to a German pharmacist who left Hamburg in 1832 to open a drugstore in Manila and later engaged in mining and established a chemical laboratory.
The book sheds light on hidden aspects of European legacies in the Philippines. It not only mentions the well-known legacies of Spanish and US colonialism, but uncovers surprising new topics like the role of the Falange or the Jewish community in Manila. The lectures were originally intended for a Philippine audience and therefore German readers without basic knowledge about the Philippines might want more background information. At 109 pages the book is relatively short, and after reading it one would like to read more about these largely unknown aspects of European legacies in the Philippines.
Simone Christ, M.A.
Die Autorin ist Doktorandin am Institut für Orient- und Asienwissenschaften, Abteilung Südostasienwissenschaft, der Universität Bonn.